I have completed my final collage for my Metamorphosis series, which consists of nine insect-human pieces total. A nine piece series may seem short, but I have exerted a year of creativity and hard work into this particular series and I feel as though I have nothing left to explore (or offer) with this series. Below is the final Metamorphosis collage, "The Perceiver". 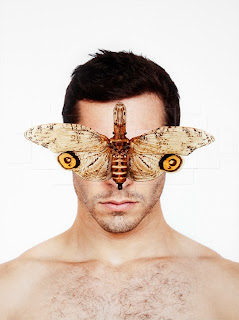 If you enlarge the image above you'll notice the "tiling effect" I utilized on the insect as well as the model's face (i.e. the forehead, cheeks, and nose). I'm glad that I was able to end the series with a color piece, considering the majority of the images in Metamorphosis are presented in black and white.

I'm ecstatic to announce that I have spent the past month conceptualizing my newest series...

Posted by Alexandra Bellissimo at 11:44 PM No comments:

My hectic summer is finally winding down, which means I will have more time to concentrate on completing (for now) my Metamorphosis series. Below is my ninth finished piece for the series, "The Siren". 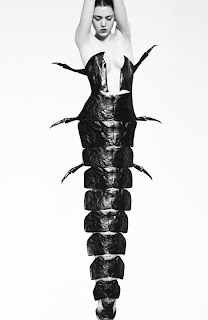 The Siren
14in. x 20in. photo collage
Subject : Larvae (Firefly)
Model : Self

The firefly larvae was fascinating to light in my studio because its outer shell photographed eerily similar to leather. I decided to play up the "leather" feel by constructing the larvae to appear as a sleek and vampy costume onto the female.

And although I'm pleased with how graphic and contrasty this piece turned out, this should be my last B&W collage I make for Metamorphosis because the series is seriously lacking some color. Here are some shots of me working on the piece as well as the actual insect I used below: Enjoy the rest of your summer!

Posted by Alexandra Bellissimo at 6:32 PM No comments:

Is anyone planning to travel to San Francisco within the next two months? If so, I strongly suggest you to check out the "One-of-a-Kind" Show at the RayKo Gallery. The group show features unique, "one-of-a-kind" photographs from a diverse group of photographers, (including yours truly). The show will display 6 of my original collages from my Simulations series. 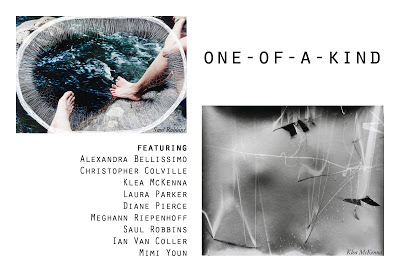 The exhibition will run from July 11 - September 1, 2013. It should be a truly unique photo show! For additional information, check out the RayKo site here.

Posted by Alexandra Bellissimo at 12:54 PM No comments:

Hello again! It's already mid-June, and I'm already growing anxious over what will be an absurdly busy summer for me. I will try to produce as much work as possible in the next few months, but it will be a challenge - considering all the traveling I'll doing between now and the end of July. Here is the newest collage for my Metamorphosis series titled, The Hunter. 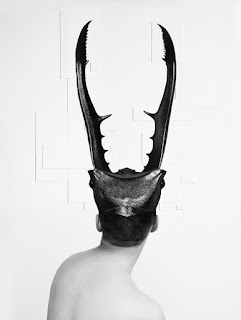 This particular species of stag beetle, (apparently there are over 1,200 types of stag beetles...whoa.) is considered a cyclommatus metallifer. It's large mandibles (jaws/pinchers) are said to resemble deer antlers. Instead of merging the beetle's mandibles to the model's jawline, I decided to play up the "antlers" comparison and construct them on top of his head. His pose is intended to appear stoic and proud, while remaining gentle and graceful at the same time. For a clearer view of how I utilized the "tiling" effect in this piece, I added two detail shots below. The shots should give a better indication of how the collage was constructed in layers on top of one another: 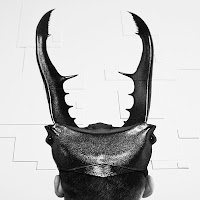 In addition to The Hunter, I was asked to do a Q&A with CHAPTER 89 - a new online magazine devoted to showcasing contemporary artists, (in the arts, music, design, etc.) with in-depth interviews. To learn more about me and my creative process, click the link below:

Hello again! I took a minor hiatus from my collage work, but now I'm back with two new pieces to add to my Metamorphosis series! Below are the collages, The Guardian and The Chief. 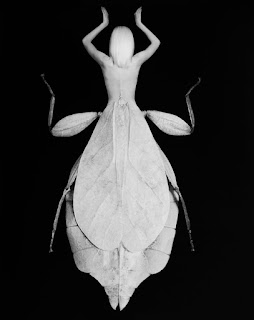 I was quite pleased with how elegant this piece turned out. The Guardian showcases the beautiful balance between a female figure appearing strong as well as delicate. In order to achieve a smooth transition between the insect and the model, I kept the tones and values of each subject as similar as possible while merging the two through their spines. To get a better view of the construction behind the spines, see the detailed shot below: 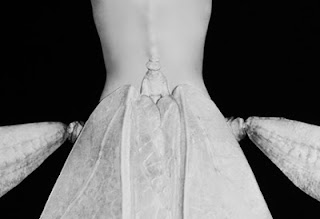 For the record, creating a tiny rounded-edge using an X-acto blade is not as easy as it may appear. And here is the second collage titled, The Chief below:

The name of the insect sums it up entirely. I kept the collaging simple without using any "tiling" or excessive layering because I felt the beetle was already visually intriguing on its own. I chose to include the insects limbs and face in the piece because they added a cool graphic element to the collage. In a way, they even resemble tribal tattoos, (an additional detail to go along with the title of the piece). And it's actually in color! This is a great example of when the use of color enhances the piece instead of interfering with it.

Posted by Alexandra Bellissimo at 2:05 PM No comments:

Below is my fifth and newest piece that I have completed for my Metamorphosis series, titled The Seeker. As you can tell, I'm seeking, (no pun intended) new and interesting techniques for collaging the insects featured in this series.
(Click below to view larger scale) 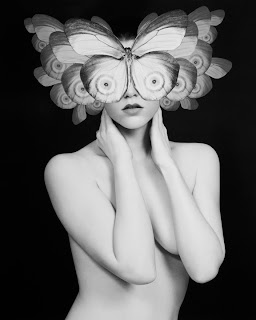 The Seeker
16in. x 20in. photo collage
Subjects : Silky Owl Butterfly
Model : Self

I'm not sure if people will have an issue with the butterflies not being placed 100% symmetrically in the piece, but I can assure you that it was an intentional decision on my part. The asymmetry of the wings adds to the illusion that the eyes are individually, "peeking out" from behind one another. Although The Seeker has a similar look to The Observer, there are several differences between the two pieces. Instead of using the tiling effect like I used in The Observer, The Seeker consists of 14 butterfly wing cut-outs that were printed and layered together in a variety of different sizes and values. To give the illusion of shadow and depth, the smaller and darker cut-outs were layered in the back.

And I apologize that this is yet another B&W collage for this series, (whoopsies)...I'm aware that I said the next collage for Metamorphosis would be done in color, (and I had every intention to make it in color originally) but when the photographs of the butterflies were printed the yellow pigment of the "eyes" on the wings were far more distracting then I had anticipated. In my opinion, the saturated color actually took away from the piece...so I chose to execute it in B&W and I couldn't be more pleased with the results.

My next piece for Metamorphosis will definitely be in color, (please someone hold me to that!)

Posted by Alexandra Bellissimo at 3:58 PM No comments:

As you can tell from the images below, I have taken a temporary break from making new pieces for my Metamorphosis series and have continued working on collages for Simulations. I blame the abrupt switch between series due to a major "creative block" and the fact that I have had these two pieces conceptualized for quite some time now. Both images (see below) are self portraits: 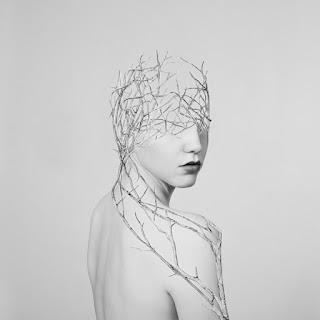 To say that "Apply" was difficult to assemble would be an enormous understatement! Each branch was cut out and glued individually and due to the fact that I was working in a smaller scale, it was an absolute nightmare to assemble together...Having said that, I am relieved that I decided to stick through the challenges of this piece given the final result is exactly what I had envisioned. 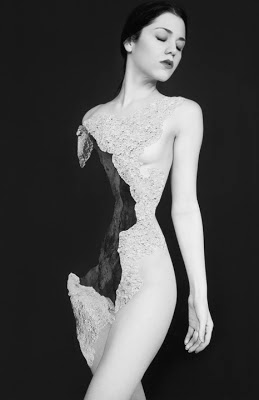 The rock, (or "cave") cut-outs in the collage above were photographed at the Vaquez Rocks Natural Area Park. In previous collages (e. g. "Rupture", "Rupture 02") I manipulated the prints of the rocks to appear as though they were protruding out of the model. In "Perish" it was important that the transition between the skin and rocks appeared much smoother. My intensions were to create the illusion that the body of the subject was decaying, hence the title.

Stay tuned for a website update this month...(fingers crossed!)

Posted by Alexandra Bellissimo at 1:56 PM No comments:

Happy 2013! I hope everyone is embracing the new year with open arms...I know I am! And what better way for me to kick off the new year then with a new collage for my Metamorphosis series. See the fourth completed piece below: 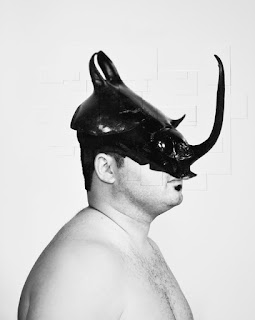 Working with the Rhino Beetle had its challenges, but overall I'm pleased with the final result.  Much like the scorpion I used for "The Antagonist", the shiny black surface of the insect was somewhat tricky to photograph. I believe the contrasting textures of the two subjects helps produce a more intriguing image. In addition, the durability of this bug made it significantly easier to move and handle...which was most appreciated by me.

I believe working with larger scale images is particularly important for this series. You can appreciate all the fine details of the insects like all the itty bitty hairs, scratches and imperfections when they are printed significantly larger than they appear in person. If you can't tell from the image above, I used the "tiling effect" again for this particular collage. I'm thinking the next piece will definitely (maybe..) be executed in color...considering my last 3 were in B&W.


In other news, I was ecstatic to be selected as a featured artist on the online gallery site, Galleray. This site has a plethora of amazing fine artists and photographers to browse through, (although I believe you have to sign up an account in order to view the artist's work). As of now, I only have images from my Simulations series featured on Galleray. Here is a screenshot of my artist's page below: 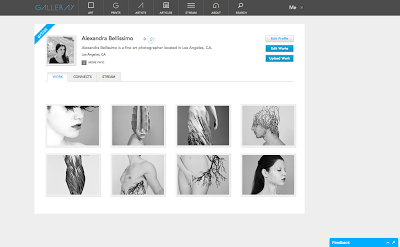 Posted by Alexandra Bellissimo at 2:02 AM No comments: