Happy Friday everyone! I didn’t get to post nearly as much as I would have liked to in April, so hopefully this month I can make up for that by posting 2 collages a week..? I'm also planning on updating alexandrabellissimo.com after I finish a few more pieces to contribute to the “Simulations” series. By then I should have roughly around 10 new collages to add to the series grand total. Here are 2 pieces I have completed recently that also happen to be self portraits: 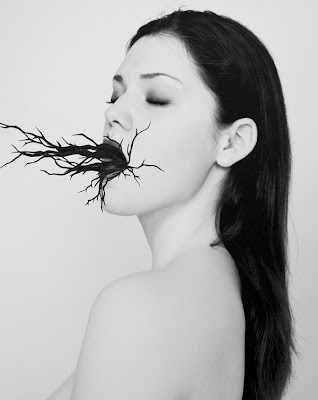 
The image above is the second version of the original Infringement collage. The original collage tends to be a favorite among people, so I wanted to take it a step further by having the tree branches protruding out of the mouth versus the eyes. While comparing the two pieces, it's interesting to see what a difference the crop of the image makes to the final result of the piece. Below is another collage I finished recently titled, "Preserve". 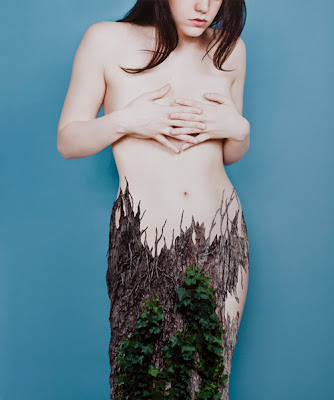 A few weeks ago I went to visit The Arboretum in Arcadia with my dad when I came across this intriguing "toog tree" seen in the image above. When I first saw the tree I was immediately fascinated by the sort of "web effect" the tiny pieces of bark made wrapped around the surface of the trunk. I figured the texture of the bark in contrast with the vibrant green in the vines looked more appealing in color versus black and white. It wasn’t until I had already been working on  the piece for a couple of hours that I decided to cut into the side to reveal more of the leg. I think it helps give the illusion that the trunk of the tree is enveloped around my lower half, instead of appearing as though they were simply glued on top of one another.


I hope everyone is having a good May so far, I'll make sure to post again next week.

Posted by Alexandra Bellissimo at 4:33 PM No comments: